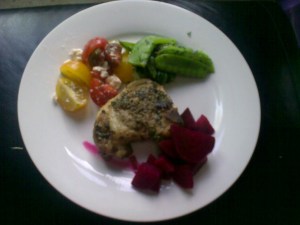 We paired the lamb with beets, tomatoes and feta and greens.

Beets: Boil the beets with a star anise and a couple of cloves until just tender and then cool under the tap. I don’t bother to peel the beets this time of year as the skins are so thin. Slice the beets into 1/4 inch chunks and place in a bowl of vinegar, honey and cloves. Let sit for however long you have.

Greens: Steam the greens and pea pods in a bit of salted water until just tender. Drain off any water and stirfry with a bit of butter. At the last second toss in a small handful of freshly chopped mint.

Dessert was cheesecake. I made it the same way as the mojita cheesecake but used crushed lady fingers as the base and instead of mint in the mix I added a bit of orange essence and some blackberries (about 1 cup) that were mashed roughly with a fork and drained of some of their juice. YUMMMMM…thank goodness we have neighbours who took the rest of this dessert or I would have been in the middle of the night finishing it off.

We take Peter to the airport for 7:00 tonight and I want him to have something with lots of protein but still be light. A bit bowl of mussells is going to fit the bill. I tried to talk everyone into trying the mussells in a coconut and lemongrass broth but I’ve been over-ruled and we’re going for our usual white wine sauce.

For dessert though I have a special treat. I’m making ugly chocolate cake. This is another recipe from Heidi over at 101cookbooks. She based this recipe on Nigella Lawson’s chocolate loaf cake from “How to be a domestic goddess”. I’ve made that recipe quite a few times and so I was anxious to try Heidi’s take on it. Accept that this cake will fall in the middle and not look pretty. It just does. It’s not you. This cake makes up for its appearance with a big taste. I hope this is as good as Nigella’s who really is my eating icon.

If you are having a hard time tracking down Muscovado sugar, dark brown sugar is a reasonable substitute.
zest of one lemon
1 1/4 cups / 5 oz / 145 g spelt flour
1 teaspoon baking soda
1/2 teaspoon fine grain sea salt
1 cup / 8 oz / 225g unsalted butter
1 2/3 cups / 7.5 oz / 215 g v. loosely packed dark Muscovado sugar
2 large eggs, beaten
2 teaspoons vanilla extract
4 oz / 115 g bittersweet chocolate, barely melted
1 cup plus 2 tablespoons boiling water
another 1/3 cup / 1.5 oz / 45 g Muscovado sugar (optional)
Preheat oven to 375F / 190C with a rack in the center. Butter a 9×5-inch (23 x 13-cm) loaf pan and line with parchment paper. You have to line the pan if you ever want to get this cake out of it. Sprinkle with the lemon zest and set aside.
Combine the flour baking soda, and salt in a medium bowl. Set aside.
Cream the butter until light and feathery, either with a wooden spoon or with an electric mixer. Beat in the sugar. Then add the eggs, one at a time, scraping down the sides of the bowl a couple times along the way. Add the vanilla, then fold in the melted (and now slightly cooled) chocolate, stirring until just barely combined. Now stir in 1/3 of the flour mixture, then 1/3 of the water, alternating until all the flour and water has been incorporated into what seems like an impossibly thing batter. Go with it. Pour into the prepared pan, place on a rimmed baking sheet (just in case there’s an overflow), and bake for 30 minutes. Turn the oven down to 325F / 165C and continue to cook for another 15-18 minutes. The cake isn’t going to test done like other cakes, but as long as your oven temp is accurate, you should be fine. Here’s an optional step – sprinkle the top of the cake with 1/3 cup of Muscovado sugar and place under a low-broiler for about a minute, or just until the sugar melts (do not walk away from the cake while it is under the broiler! It can burn in a flash)…
Place the loaf pan on a rack, let cool completely, and enjoy the next day.
Makes 8 – 10 slices.