why…eat really good roast beef. Our little one has gotten a whopping four new teeth this weekend. As a result we have been basically up since last Friday with a very unhappy kiddo. Meals have needed to be made by the walking dead-hungry walking dead.

I threw a roast of beef into the slowcooker on Sunday and we decided to make it into roast beef sandwiches (while watching footbal in our semi-comatose state). However, having been up at 4:00 the previous morning we had watched “Diners, Drive-ins and Dives” and saw a miraculous sauce that a restaurant made to go with an elk burger and we decided to make an easier version of it.

In a pot boil together until reduced by half: 1 cup of meat jus (just from the slowcooker pan), 1 bottle of dark beer, 2 T. of mustard seeds, 2 T. of mustard powder, 1/4 cup brown sugar, 2 T. horseradish. AMBROSIA! 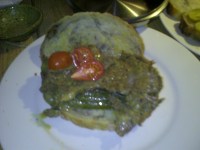 I made another batch of “Artisan Bread in Five Minutes a Day!” and we were off to the races.

The flourless chocolate cake was like a soft chocolate bar with only a slight crunch on the top. I would serve this in the summer time with a lot of fresh berries. 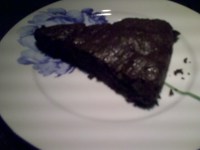 Last night was a rewind recipe of sweet and sour pork (leftovers from last week) with pineapple. I made this recipe last spring and have been waiting for enough leftovers to make it again.

Tonight will be an enormous salad and whatever fish is freshest at the market tonight on the way home from work. Update later this week but I’m thinking sesame encrusted hmmm…