Well, you saw my picture of shame earlier this week but how are things now? Admittedly, I took this picture just before I put away my organic bin this week. The fridge is rather full right now but we’ll make our way through those goodies pretty quickly.

I’m going to focus on the positive as I had a rather negative February and don’t want to fall back into that habit.

I was able to use the majority of my dicier produce in my fried rice this week, including a rather circumspect chunk of cabbage. I chopped-up all the veg on Monday night while Madison was eating chunks of cucumber on the kitchen floor and had them ready to go.

I rescued three tomatoes, a red pepper and a bulb of garlic by roasting them in the oven and then pureeing them into a nice pasta sauce. This was easily done Sunday when I had the oven on for some other cooking. Wednesday night I just added some meatballs (already made) and cooked some pasta. My little carnivore hoovered the meatballs down but I still can’t convince her to eat any pasta.

I saved a couple of lemons from certain death in the bottom of the fruit drawer by making some nice lemon curd (see the recipe for orange pie) for Sunday’s dessert.

The Welsh Rarebit casserole was eaten all in one meal! The husband suggested that we have this MANY times and maybe next time make the sauce using a fondue recipe for fun.

What needs to still be taken care of?

All of those bloody jars of things. I will be crying over this as most are fairly expensive concoctions of things that have just a bit at the bottom. Oddly, my homemade preserves never get thrown out. That should tell me to stop wasting money on the other things shouldn’t it?

I’m going to have to go through them all and unfortunately toss some of the contents (grrrrrr…). They’ve gotten way ahead of me the past few months and I know a few will be sporting fur by now. Shamefully, I haven’t done this chore since we got a new fridge and that wasn’t yesterday or the day before.

I also made a really nice Salade Nicoise for my work peeps on Thursday for a much swisher lunch than we normally have. I’ve described the tuna process before and the potatoes are dressed with a balsamic, olive oil and garlic that the rest of the salad got doused in.

Here is a gratuitous photo of the babes avoiding going to bed by making a nest of pillows on the floor-doesn’t she look tired? 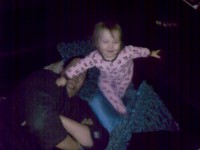 What will be our special Friday dessert?

I love the blog that this is from. The people have great ideas and most importantly a really good sense of humour.

Lemon Souffle…(I have a bunch of lemons that were on sale and I REFUSE to get rid of any of them. Not local but well…)

How to:
1. Preheat oven to 350 deg.
2. Combine sugar, lemon juice, egg yolks, zest, salt and butter in a medium bowl and mix until smooth.
3. Beat egg whites until stiff peaks form and then fold into sugar mixture.
4. Pour into a greased souffle dish (I like to grease the dish with coconut oil) and place in a tray of water that goes halfway up the sides of the souffle dish. Bake for 55 min or until golden brown on top.