I linked to Shabby Nest today to share my sea salt truffle recipe.  If you have a chance, check the site out.  Lots of great ideas.

All this time I’ve been thinking about food waste in terms of how unfriendly it is to the environment but let’s not forget how much money this tranlates into too. One of the other regular “linkers” at frugalgirl is actually costing out how much food she throws-out.  I don’t know if I’ll do this often but I’ll give it a try this week.  I don’t think that I’ll be very happy with the results.

1)  A handful of cooked vegetables that didn’t make it into a lunch leftover meal. (approx. 1.50)
2)  Two pieces of storebought bread-I thought it would be a treat but apparently it wasn’t.  (.30)
3)  1/4 cup of homemade pate-it just got lost and forgotten about (2.00)
4)  A lemon-ummm you’re done when you turn blue and turn into another lifeform that has a discourse with you while you take it to the composter. (.99)

All in all, not horrible but I know that if I weren’t reporting here every Friday it would have been really bad. I would have normally made at least one other meal and not pushed the leftovers as much as I did.  This weekend we’re going to have to eat A LOT of produce because I am not sacrificing any of that expensive stuff to the compost gods.

food you wait to die in
my dark and messy fridge. sigh
wasted money. blah.

A big disappointment in the meal department this week was the Jacob’s cattle dish.  I cooked it the way that it said and wasn’t fussy on the blandness so I dumped it into my slowcooker with some more spices and some chicken broth and it was better.  What it really needs next time is some hp sauce thrown in.  I’ll hang onto is over the weekend as we might eat it for lunches but likely it’ll be on my victim list next week.  It’s too bad because it looked really pretty and it’s a lot of ingredients to sacrifice.

The husband has been ill all week (man cold) and I’ve fit a six day, work week into four so tonight we’ll have appetizers out of the freezer and for a treat we’ll have;  Grandma Gibson’s Rolly Pollies.  These freeze really well but they usually don’t make it to the freezer.  This again isn’t a fancy recipe but it was something that we had often and it is the memories of eating it with everyone in the big farm kitchen that makes me want to share them with my kiddo.

This is the Ottawa Valley version that has cinnamon, butter and brown sugar in the middle instead of jam.  In fact, I didn’t even know that you could have jam instead until I was an adult and went to England.

Roll onto a floured work surface (1/4 inch thick), butter the entire dough and cover with brown sugar and cinnamon.  Roll into a log and cut into 1/2 inch thick slices.  Place on a baking sheet and bake at 375 for 10-12 minutes.

Every second week a colleague and myself  run the “Epicurean Club” in our school.  We have it open to all the kids in the school but take the first 24 kids that show-up.  We’ve been able to sell our products to staff members so the club is free and we’ve tried to pick unique foods to make that represent the various backgrounds of our kids.  So far this year we’ve made: red velvet cupcakes, gingerbread, chutney, stuffed meatballs, gyozza, springrolls…tonight we make vegetarian sushi.

So that the kids can focus on the technique and their cutting skills I made the sushi rice last night.

All you do is take 2 cups sushi rice, 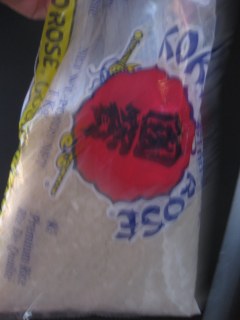 rinse it several times in cold water, place it in a pot with enough cold water cover the rice once over.  Cook on high heat until the rice is tender (about 15 minutes).

Add to the still warm rice and chill until totally cooled (like I said, I made this last night to use tonight with the kids).

I’ll be showing the kids the method that I learned in this handy book and putting in it; tofu marinated in chillis, strips of carrot, and strips of avocado. The trick is to put a piece of plastic wrap on your work surface, warm your nori pieces over the oven element then layer on the sushi rice and the rest of the fillings.  The plastic wrap is then used to help you roll as well as, wrapping the roll until you want to cut and eat it.  I like a bit of wasabi and soy sauce with mine.

Today is also the day that it is my turn to make lunch for “the girls”.  We’ve got pumpkin ravioli with pesto and cheese AND as I’m organizing the grade six night Parent night I felt it only right that I make dinner for the folks that I’ve talked into staying so late this evening.  I made Tyler Florence’s thai chicken soup again.  I could drink gallons of this stuff.

This was my basket ready to go to work today.

AND I even remembered to bring toys from home for the kids that will need babysitting while their folks are touring our school.  Whoosh!  Bring on Friday!

Madison was a huge surprise for us.  We had been told quite some time before that we wouldn’t be able to have kids and that even fertility treatments would be very unlikely to be successful.  So we mourned what might have been and then got on with lie and enjoying everything that we’ve been blessed with.  We had seen other couples torn apart by being childless and didn’t want to be another one.

We both said it was ok and that we had each other and…then one day I went to the doctor because I had been really sick for a couple of weeks and my “flu” didn’t seem to be getting better.  The doctor gave me a pregnancy test before he prescribed antibiotics becuase that’s what you do.  We both sort of looked at each other and said “Well, this is a bit of a joke becasue we know what it’ll say” and the stick showed positive.

There was a long silence and then we both laughed and decided to do another test as this one was obviously incorrect.  The second test was positive, a hurried ultrasound the next day showed a little heart and all of those impossible dreams that we had shelved years before came rushing back.

One of those was realised last night.

Yep, we had a tea party 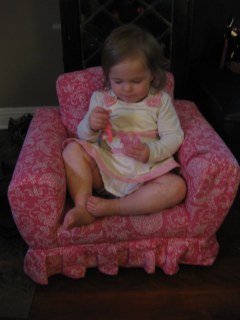 And blew a lot of bubbles in our pink rocking chair.

Then she went to bed (briefly) and I replenished our granola supply.  Now, I loved Locavore’s maple granola but I also got a book all about Quinoa ( by Patricia Green and Carolyn Hemming) at Christmas from my father-in-law and one of the recipes was for granola.  Yyyyyyuuuummm… 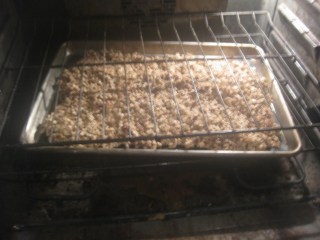 I also made a big batch of funeral squares.

Shortbread bottom ready to be baked 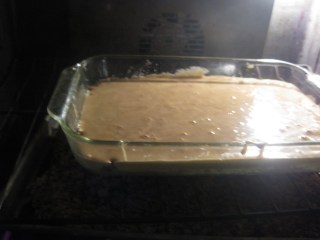 And I put the Jacob’s Cattle Beans to soak over night.