Two posts in one day?!  Weird, but I didn’t think they made sense together.  I am also linked this week (cake pops) to ShabbyNest.  If you want to be totally amazed and a little daunted check-out all the talent there.  I am inspired every week.

Apparently the husband, in his waning years now, is thinking about our courtship this week when he is making his dinner choices.  Last week he discussed a dish that I made our first year of dating but haven’t made since (again-I have no idea why).  I didn’t even remember the dish until he brought it up recently.

It’s called Sicilian lamb (I don’t why AND even worse I have no idea where I got it-it’s on another crappy looking recipe card.  Written in marker in my lovely handwriting (insert sarcastic tone).

I made this for my 30th. birthday and a bunch of friends from highschool came to Ottawa to lament our long-lost youth.  After we had a few beverages we once again became VERY hungry and invented (or thought we did) lambwiches.

I have to admit that by using a better camera the photo makes it so that I don’t even need to rewrite the recipe.  Yay!  We’ll have this for lunch on Friday.  As we are a blended family there are going to be a number of Easters this weekend and a bit of lamb will change it up from the turkey and ham that is also on the menu.  Perhaps we’ll all have a side order of gout at the end (smirk). 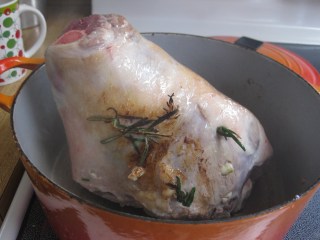 Happy Earth day to everyone by-the-way.  What will you do for Earth Day?

We’ve been trying to incorporate as many friendly things into our lives the last few years so I am slightly stumped as to what to do next.

Here’s where we are so far:
1)  Use the car as little as possible and make one trip “do” for a lot of things.
2)  Grow as much as we can in the garden and avoid andy chemicals.
3)  Keep all machinery tuned-up and using as little energy/fuel as possible.
4)  Cloth Diapers
5)  Cloth napkins and no paper towels
6)  Consider purchases (is it overpackaged?  do we really need it?)
7)  Get used baby things when possible
8)  Know our food and where it comes from
9)  Eat at home or a place where people have the same ideals
10) Get house insulated to the nth
11)  Replace appliances when possible with energy efficient ones…

I think the thing that I would like to consider is something that I read about a week ago, putting motion activated lights into most rooms.  Some people in the house (cough…husband) don’t really turn off lights when they leave a space.  As other people in the house become more autonomous (baby) I don’t think that I will be able to keep up with the lights being left on throughout the house.