All this time I’ve been thinking about food waste in terms of how unfriendly it is to the environment but let’s not forget how much money this tranlates into too. One of the other regular “linkers” at frugalgirl is actually costing out how much food she throws-out.  I don’t know if I’ll do this often but I’ll give it a try this week.  I don’t think that I’ll be very happy with the results.

1)  A handful of cooked vegetables that didn’t make it into a lunch leftover meal. (approx. 1.50)
2)  Two pieces of storebought bread-I thought it would be a treat but apparently it wasn’t.  (.30)
3)  1/4 cup of homemade pate-it just got lost and forgotten about (2.00)
4)  A lemon-ummm you’re done when you turn blue and turn into another lifeform that has a discourse with you while you take it to the composter. (.99)

All in all, not horrible but I know that if I weren’t reporting here every Friday it would have been really bad. I would have normally made at least one other meal and not pushed the leftovers as much as I did.  This weekend we’re going to have to eat A LOT of produce because I am not sacrificing any of that expensive stuff to the compost gods.

food you wait to die in
my dark and messy fridge. sigh
wasted money. blah.

A big disappointment in the meal department this week was the Jacob’s cattle dish.  I cooked it the way that it said and wasn’t fussy on the blandness so I dumped it into my slowcooker with some more spices and some chicken broth and it was better.  What it really needs next time is some hp sauce thrown in.  I’ll hang onto is over the weekend as we might eat it for lunches but likely it’ll be on my victim list next week.  It’s too bad because it looked really pretty and it’s a lot of ingredients to sacrifice. 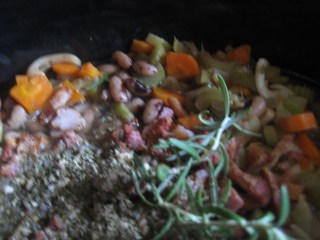 The husband has been ill all week (man cold) and I’ve fit a six day, work week into four so tonight we’ll have appetizers out of the freezer and for a treat we’ll have;  Grandma Gibson’s Rolly Pollies.  These freeze really well but they usually don’t make it to the freezer.  This again isn’t a fancy recipe but it was something that we had often and it is the memories of eating it with everyone in the big farm kitchen that makes me want to share them with my kiddo.

This is the Ottawa Valley version that has cinnamon, butter and brown sugar in the middle instead of jam.  In fact, I didn’t even know that you could have jam instead until I was an adult and went to England.

Roll onto a floured work surface (1/4 inch thick), butter the entire dough and cover with brown sugar and cinnamon.  Roll into a log and cut into 1/2 inch thick slices.  Place on a baking sheet and bake at 375 for 10-12 minutes.