I’ve mentioned that our house is not large before and that our kiddo was a huge surprise to us. Our renovation/addition won’t be ready for months and as such we’ve had to get fairly clever out of using the space that we have.  The house that used to have two adults that were out a lot and a cat that pretty much lay down wherever for long periods to three adults and a child that has a LOT of stuff.  Sadly the cat passed away last summer.

I’ve been really inspired by all the ideas that I’ve been seeing at ShabbyNest so I decided to do a series of entries on my latest projects.

My favourite thing lately is a little spot that we created for the baby to play.

The babes wants to be in the kitchen ALL the time and that isn’t working great so here is what we’ve made for her. 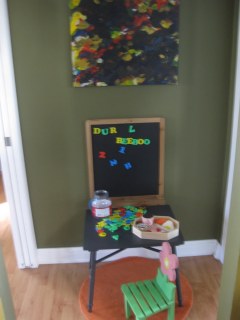 And she actually plays there-weird.

All that it took was a table from my bestie that I repainted with chalkboard paint (no chalk is given yet since the great “chalk eating incident” a few weeks back), a wee chair that I painted to look like a flower and a message board from IKEA.  Add in: tea set, magnetic letters and if you are one-this is a party.  I’ll make it more girlie in the next bit with a different rug and a few other bits and bobs but I wanted to see if she would actually go there.
I’m pathetically pleased.
I love hearing from you. Leave a comment-make my day.

4 thoughts on “Play space out of no space”