I love trifle.
I know it is old fashioned and some people think that it is a little old lady’s dessert but I love it.
What I don’t like is all the steps that it requires when I’m pressed for time and it is hot and I want something a bit lighter so…
How about a modified trifle?
My Brit relatives will not think much of this version but it is awfully tasty and takes almost no time.  It is also pretty enough to serve to any company that is over for dinner.
I took these lovely plums and pried off the stickers (what do they put those things on with?!)

Sliced into a funky bowl and sprinkle with a T. of sugar.

Pour over limoncello (about 1/4 cup).  If you aren’t a tippler then why not a bit of lemonade or lemon syrup?  Let sit in the fridge for at least 30 minutes.  I’m still waiting for my homemade to be done so I have to open a bottle of the pre-made (ahhh…too bad).

In a pretty glass add cubes of ginger cake.  I made this one (http://jane-adventuresindinner.blogspot.com/2011/04/adventures-of-food-waster.html) but you could just as easily buy one.  Hide the container and only we’ll know.

Layer in dollops of rich yogurt.  I used a full-fat maple yogurt but lemon or vanilla would be just as nice.  Top with plums (with some of the delicious syrup from the bowl) and repeat ending with a spoonful of yogurt.  Dust with a bit of cinnamon.

Eat it very late at night after you have cleaned-up after the builders who are either creating a great new space or systematically destroying your house.  It’s really a toss-up right now. 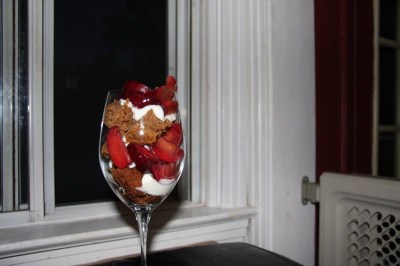 Nice baby gate in the corner of the picture, eh?
I love hearing from you. Leave a comment-make my day.