“Tell us about your song.”
I tend to soundtrack most things in my life.
I’m a chronic hummer and make up my own words to songs as I belt them out in the car.
(this is actually called a Mondegreen for those of you who are total word Geeks)

So it wasn’t easy to narrow this down to two songs-both of which link back to my husband.

Neither of us are terribly romantic people, I think we tend to go for solid, happy living day-to-day than the grand gesture.  Not necessarily exciting but it works for us so it comes as quite a surprise we have two songs that are ours.

You see, we met fairly late in the game as far as our social circle goes.  Most of our friends met early in their early 20’s and fell very hard for one another.  It took us a few more kicks at the can to get it right.  In fact, my husband and I nearly met at least a dozen times before we actually met face to face.

We even knew many of the same people but had never quite crossed paths until all the stars were alligned and we’d made a few mistakes.

We finally met taking a French class at our local college after work and I started to get an inkling that he ‘liked me’ after he sat in the same seat each and every night even though we didn’t have assigned seating 🙂  We started to chat and after a few false starts he asked me on a date.

I was pretty smitten almost from the start, even though I had thought I was not looking for anything serious-isn’t that always the way?  I was a bit unsure of what he was thinking until a month or so later when I went on a holiday with a girlfriend.  I wasn’t leaving my phone on very much and was surprised one day by a message left by him with the song “Steal my sunshine” on in the background.

I know, very high school but it worked nonetheless.

Whenever we’ve gone through something we’ve played this for each other for a quick reminder of what really matters and how it all began.

Fast forward to our first Christmas together and I had mentioned that I love the very dark comedy “Grosse Point Blank”.

I’m a bit warped and this is about as romantic as I get so I always loved the scene where “Let my love open the door” is playing and it is as if the two character (Minnie and John’s) are willing to give “it a go”.

Well, the future husband got me both the dvd and the cd.  He apparently was/is just as warped.  I knew we were meant to be.

Four years later I walked out of our front door, around the side of the house and married the man who reminded me to “let my love open the door” in front of good friends and our wonderful families. 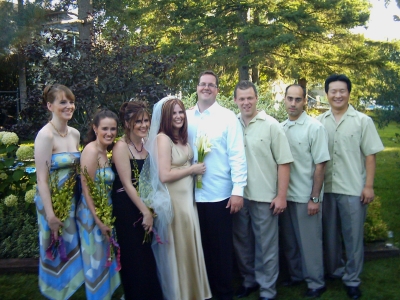 Umm…yeah.  I change my hair a lot.

9 thoughts on “Mama Kat’s: Your song”