The prompt:  A recipe that went all kinds of wrong
The story
I﻿ was actually reminded about this story a few weeks ago (weirdly coincidental) when teaching expository writing to my students and trying to explain the importance of making sure you have all the steps of a project down.
I told the story of my first ever souffle.

How I was this rather weird 10 year old who loved to cook and wanted to make something spectacular for her folks so I chose a souffle.

The recipe called for the usual; eggs, cheese, butter etc.

I measured everything out, doublechecked and it was…a hard cake of glop which my Dad (bless him) chipped out of the pan and somehow choked down.  That is the sort of devotion that only a parent can muster.  Even your best friend will not eat something that horrible.

This was not what the picture had promised.  How could I have gone so wrong?  Seriously.

(not totally part of the story but quite funny nonetheless)
I didn’t attempt a souffle for a very long time until I reread that recipe a few years later  and they had left out the part where you separate the eggs and whip the whites.  Sort of crucial if you want something that a person other than your Dad will eat.
Here’s what I can do now-with the right recipe. 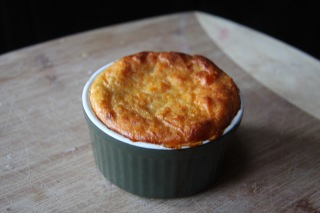 Pop by later this week to see how these lovelies are easily made.
I promise I won’t leave out the part where you whip the egg whites to a firm but happy peak.
I love hearing from you. Leave a comment-make my day.

9 thoughts on “Mama Kat’s: All kinds of wrong”