Ok, I’ve taken a BIT of poetic licence with that Shakepearean quote (a bit) but I’ve got a neat recipe that has a rather startling colour.
Here’s a bizarre version of the original as part of a BBC series called “Hetty Wainthorpe Investigates”-if the main character looks familar its because Patricia Rutledge also played Hyacinth Bucket.
I digress as usual.
Everyone and literally their brother has now either tried or at least heard of red velvet cake but I’ve got a different take for you.  How about red velvet brownies?
Well…clever clogs Tara over at smells like home had a great recipe for these curiously, coloured delicacies that I’ve adapted for my own selfish purposes.
Beat 1 cup butter and 2 cups of sugar together.  Add; 4 large eggs.

Watch this part-if you are wearing white you will get it all over you.  Add in 6 T. cocoa powder and 4 T. red food dye.

Add the innards of one vanilla pod.  Mix, mix, mix. 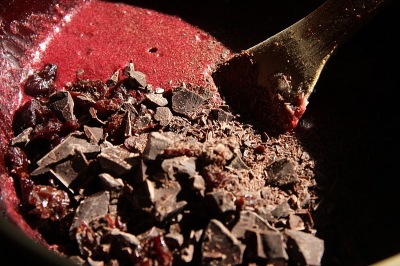 Finally stir in (using as few strokes as possible) 2 1/2 cups of flour.  Spread into an 11X9, buttered pan.

Bake for roughly 30 minutes (330 degrees) or until a knife comes out ALMOST clean when inserted.  If you wait until they are totally baked through they will be dry when you eat them.
While still very hot, top with 2/3 cup of roughly, chopped chocolate.

Spread with a knife when melted.

Go and play with some cuties while your friend makes you an amazing pulled pork dinner (thanks Michi!).

Chop into diamond shapes (just because) but wait to take your final photo until it is too dark to make them look really decent. 🙂

5 thoughts on “Brownies by any other colour…”