Today in Canada, like many parts of the world we have Remembrance Day.  This is the day we honour those who gave their lives in service and hopefully adopt the adage “never again”.
November 11th. is a sombre day in our house.  My father-in-law is a WW2 veteren and as he ages it seems that the past somehow seems closer than farther away.
Here’s his very abreviated story.
In 1939, having survived the Great Depression, London was being blitzed on a nightly basis.  P. had excelled in calculus in school so as a 16 year old was put into the Royal Air Force.  Being too young to serve he volunteered to be a firefighter.  At night, while the bombs fell he drove the firetruck and fought the flames.  During the day, he drove the morgue truck and found those who hadn’t survived.
At 18 he was able to become a navigator and co-pilot flying missions on; D-day, being one of the liberators of the Concentration camps and after the war in Europe ended being sent to Asia and Africa.  Somehow he survived being shot down six times, malaria and navigating the Pacific ocean with only the most rudimentary instruments.  And when the war was over he moved to Canada and started fresh.  So fresh that my husband had little inkling of his Father’s role in WW2 until I came on the scene with my degree/interest in history.
My teenage years in suburban Toronto were considerably different.
Take a moment to thank a veteren today and say a prayer for those who are in dangerous situations as we speak.
So what does all of this have to do with Food Waste?  Well, during the War you could even be fined if you were found to be wasting food.  MOST people were hungry on a regular basis and rationing was the norm.  Leftovers were NEVER thrown out but they were often reinvented.  To this day my father-in-law’s favourite meals are the ones that I make to ‘use up’ what we have on hand.
This week we were able to waste nothing due in part to this great meal the other night.
If you want to see a great documentary on a modern family living under 1940’s conditions the BBC created “The 1940’s House” a few years ago and it is a treat to watch.  Here’s the first part off of youtube, the rest is just as easily found.
I started with leftover shortribs and cut the meat up.  I did the same with the leftover vegetables from that meal and added the last of this week’s mushrooms. 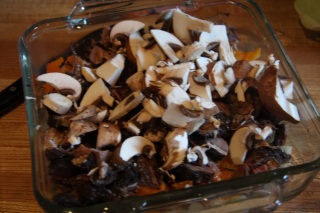 I tossed everything with 1/4 cup of flour.  Added 2 cups of beef stock and bakes the dish until bubbling (I already had the oven on baking a couple of other things anyway.

When everything bubbles and the flour thickens the dish to form a gravy (approx. 20 minutes at 350), top with a sheet of pastry (I’m using my beloved puff pastry but you could even use biscuits in a can). 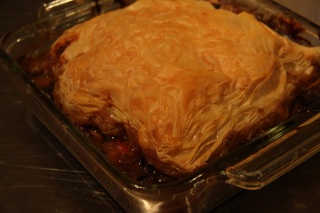 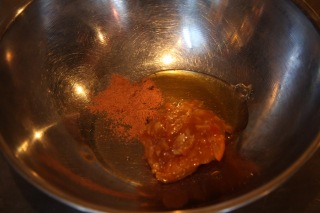 Add two eggs and 1 1/2 cups of milk that is JUST this side of fresh. 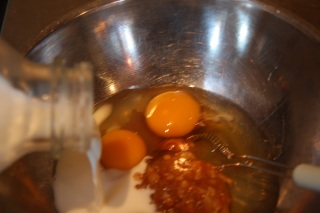 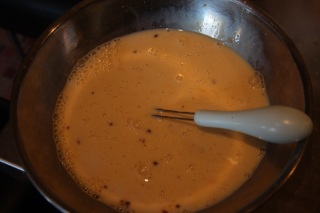 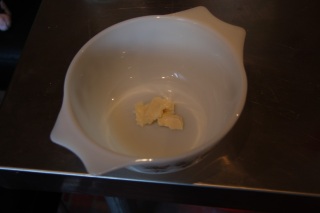 Layer in chunks of bread and little nobs of butter to the top of the dish. 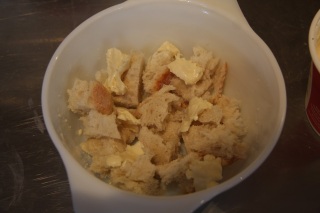 Pour in your custard mix. 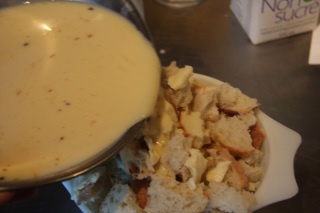 Let sit until the custard is soaked in (10 minutes is great). 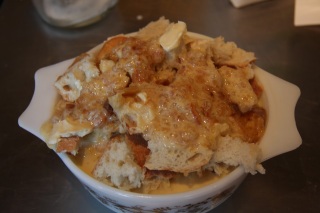 Bake until puffy and the custard is firm (30 minutes at 330) and serve with maple syrup (or golden or more honey) and if you are really not living under rations-icecream.