My wastage this week is a bit depressing. We’ve been trying to move plants each night to save them before “the big hole” is dug. I’ve pampered these plants for the past six years, spending a lot of time and money on their welfare and the thought of them destroyed has made me more than a bit cross to be honest.

Finding homes for my plant refugees has led to some slapdash meals and leftovers not being packed for lunches. Here is my rather disgusting (appetite spoiler alert!) compost bin with;

a serving a pea soup (which let’s face it starts off being fairly unattractive), FIVE rhubarb muffins that actually fermented and turned into toxic oooze, 1/2 a bag of chips and 1 squishy pear. Oddly there is no Sacher torte and no Charlotte Russe-I was mildly shocked by the chips. I know that I could have used them as crumbs for a nice topping but they were transported in the car and the baby has a few car sick issues and the smell of them created a rather stomache rolling memory for me so into the bucket they went.

I think that I’ll make myself feel better by thinking about generosity.

Whenever I hear of a “secret recipe” it sort of makes me sad. You see, I love sharing recipes. Actually, I’m one of thoese freaky people that does’t really enjoy something unless it is shared. How can you truly love something if you don’t have someone to offer suggestions or praise or mmmmm sounds?

I was really happy to meet a kindred spirit quite a number of years ago and restaurant in Port Perry called “The Murray House”. It was so long ago (like 1989 long ago-sob) that I truly even doubt that they are still there.

I had a simple salad with a vinaigrette that you would dream about to the point you could drink it. In my massive clean-up of cookbooks I found the recipe tucked into another book written on scrap paper.

The owner of the restaurant had kindly written it down for me. I can’t even count the number of people that have done this same thing for me through the years. I’m always amazed when restauranteurs do this since their livelihood depends on the recipes that they create. I hope that I have always been as generous. 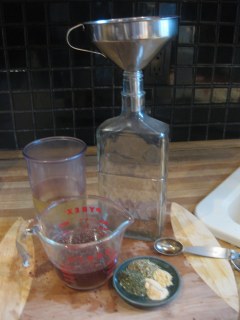 Add enough mayonaise to make creamy. No this isn’t a low-calorie dressing. No creamy cucumber with weird ingredients here. However, I only made a half a batch. I used about 1/2 cup of mayo to get it nice and creamy. Mix it in a bowl and don’t be the twit I was and have to jam the mayo down the throat of the bottle. Messy. 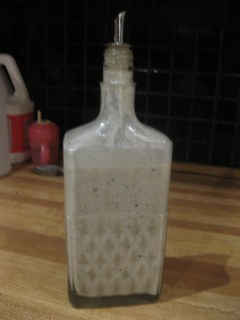 I served it with a nice cherry tomato and radish salad but it is just as good with green or as a potato.