Whoosh!  I’m amassing quite a list here and hopefully I won’t even need to report on them soon to keep myself honest.

1)  Starbucks:  ONE visit.  Not bad.  Not perfect.  But I had a tea ($2.00) instead of a Venti latte ($4.00+), so still, a vast improvement.  One thing that is happening though-a number of people at work have noticed the quality of the coffee that my press is producing and “just happen by” when a pot has been recently brewed.  Coincidence.

2)  Clothing:  Here are my pile of donations so far-the pile grows daily.

There is one piece of clothing that I am VERY glad to have gotten rid of.  I had a pair of skinny black pants that were size 3.  I fit into them for about a day just before I found out that I was pregnant.  There is no way that I will EVER fit into these again.  I could be stuck on a barren, desert island for three months and still not fit into these and…I’m ok with it.  This is a really big step for me.

I’m trying to rework some of the clothes but am running into problems.
1)  I usually don’t like something because of the fabric OR because something bad happened the day that I wore the item (I know.  This makes no sense).  Ergo, changing the shape of the piece is not going to help and 2)  I have no talent or inclination to get better at sewing.  I made a hamburger pillow in the 8th. grade because I would have otherwise failed the class and that is about it.  I admire people who sew.  I just don’t.

However, instead of buying my usual change-of-season purse I am reusing one that has sat in my closet for a couple of years.  I’m actually falling in love with it all over again.  SCORE!  This was not a cheap purse.

I went into a bit of a buying frenzy for about a week (even more than usual) almost two years ago. I was also horribly testy to my sister and my best friend (cringe-bad emails).  THEN I realized that the hormone attack I was under was-pregnancy. 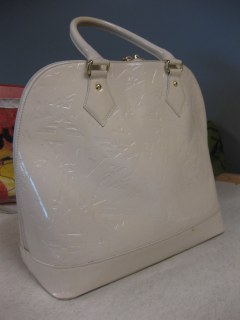 I’m making my way through my clothes slowly but I haven’t gotten the summer ones out yet. I should be allowed to buy something next February. sigh.

What I really want is this Diane von Furstenberg dress that the designer herself is modelling.

3)  Photography:  My next step in photography (props to Pioneer Woman for the list) is to fill-up most of the frame with the food BUT not get so close that the whole thing looks like glop.

But what they really are are quite lovely orange and almond muffins. 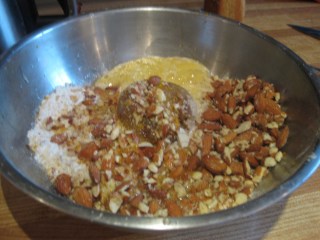 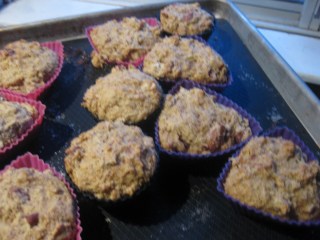 4)  Library:  On the way is the next book for the bookclub that I belong to.  We’re going to be eventually reading:

The Happiness Project Or, Why I Spent A Year Trying to Sing in the Morning, Clean My Closets, Fight Right, Read Aristotle and Generally Have More Fun

What I normally would have done is go directly onto the Chapters site and ordered it right away.  Instead, I went to the library site and got on the waiting list.

What I need to do now is to clean out my book closet before it disappears as part of a new hallway.  I’ll even take a number of the books to the used bookstore near us and perhaps make some cash.  Cool.

5)  Pantry clean-out:  I have a lot of beluga lentils right now-I know, there’s weird stuff in my pantry.  This is what I have in mind to pair with a barbecued steak.

Cook lentils until tender, cool under running water and drain thoroughly.  Dress with a balsamic vinaigrette, olives, chopped celery, carrots and parsley and a nice salad is born.

You could really make this salad with any sort of lentils.

6)  New challenge:  Wouldn’t want to get complacent would I?  I’ve got a lot of cookbooks. 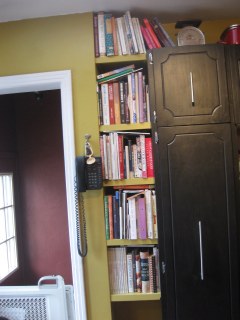 They have been amassed over the years in my ongoing bid to own all the books in the known universe (slight exaggeration).  I don’t use them a lot now though due to the internet.  So, each week I’ll make one recipe out of one of the books and this will give me an excuse to go through the book.  I’ll then make the decision to either get rid of it or keep it.

I want to somehow find time to paint the kitchen this summer and having less books to move around might help.

I’ll choose one at random tonight and pick a recipe. I was able to get rid of three this weekend already all were from the 80’s and the food was not only unappealing but the language was even dated.